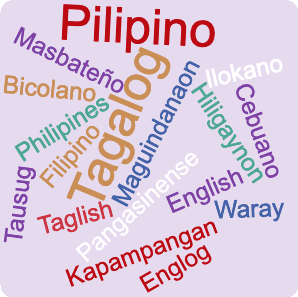 Marketers and businesses wanting to penetrate markets speaking the language of the Philippines often find it confusing when trying to translate their materials into the native languages. Often, they find themselves faced by a virtual word-salad of choices and misinformation on the subject. This article attempts to explain and simplify those choices.

Part of the confusion stems from the fact that the Philippines has a long history of different settlers occupying the country (most notable for this case was America, who resided in the country for around 40 years).

The Philippines remains a highly multilingual nation; approximately 170 languages are spoken by the nation’s 103,000,000 citizens. Of these, the most widely spoken languages are:

In the 1930s the Commonwealth government insisted that there was a need for a national language, given the variety of languages spoken across the archipelago. Since Tagalog was the primary language spoken in Metro Manila and nearby provinces, it became a leading candidate. However, some representatives opposed it, as they believed that not all Filipinos at that time knew how to speak in Tagalog. Hence, the constitution only recommended the need for a national language in the future and to consider incorporating the spoken languages from the entire country. When the constitution was drawn up, Tagalog was only spoken by about 25% of the population.

During the 1970s, former dictator, President Ferdinand Marcos, focused on creating a “new society” for the Philippines. As such, nationalist academics took the opportunity to advance their efforts in developing the national language called Pilipino at the time. They worked on enriching the Philippines’ vocabulary by incorporating and modifying words from other languages such as English, Spanish, Malay, and Chinese. In addition to adding words for things that never existed back when Tagalog came on the scene, they also replaced unsound Tagalog words with words from other languages to make it more pleasing to the ear; for instance, they suggested using the Spanish-derived word silya to refer to a chair, instead of using salumpuwit, which Tagalog purists would use.

Tagalog was the lingua franca of people who lived in or near the government capital, and by the 1970s, more than half of the Philippine population was using Tagalog to communicate with one another. In the late 1980s, during former President Cory Aquino’s term, the constitution finally labeled Filipino as the country’s national language and it became formally standardized. By that time, the majority of Filipinos were using the language in daily conversations. In addition to deriving words from other languages, the letters f, j, c, x, and z were also added to the Filipino alphabet. These were not natural sounds to the native citizens of those islands before the arrival of foreigners from Spain and the Americas, but they quickly became a part of the Filipino alphabet.

So, if you’ve been following this historical perspective, you can now understand that Pilipino is just the previous name for Filipino, which is basically Tagalog, incorporating commonly used words in English and Spanish. For example, the Spanish word diccionario has been incorporated into Filipino as diksyunaryio. However, a Tagalog purist might insist on the native word for dictionary, which is talatinigan. Tagalog has a significant amount of loan words that originated in Spanish. That means the Spanish loan words are now part of the Tagalog language and thus should be appropriately called a part of the Tagalog vocabulary. It isn’t Spanish when you use it in Tagalog. Even though Spanish has “bequeathed the most loanwords in Tagalog”, there are distinct differences between their pronunciation, spelling and even usage. For example:

Many people see no distinction between Tagalog and Filipino, but the differences outlined here are important because people speaking a more pure and native form of Tagalog are often seen as using ‘antiquated” language compared to people in the bustling business world of Manilla or the US where the modern Tagalog/Filipino is more prevalent.

We could therefore answer the question “What is the difference between Filipino and Tagalog?” by saying that Tagalog is the foundation upon which Filipino was built, and Filipino is the natural evolution of Tagalog. For most business and marketing applications, this is what you are looking for.

English to Taglish (or Englog)

The other official language of the Philippines is English, which brings us to the subject of Taglish or Englog. Unlike Filipino, where words from other languages have been localized and consumed by the parent tongue, Taglish is literally English and Tagalog mixed together outright in a system referred to in language circles as “Code Switching.”

Taglish was originally a manner of speaking in Manila involving the mixing of English and Tagalog together. However, this practice has spread to other areas where both English and Tagalog are spoken. Next to switching between sentences in “pure” Tagalog and English, Taglish speech especially consists of sentences that follow the rules of Tagalog grammar with Tagalog syntax and morphology, but that employ English nouns and verbs in place of their Tagalog counterparts. For example:

An English-speaking tourist stepping foot in Manila for the first time might be struck by the inescapable snippets of the English language throughout the diglossic Filipino society. From kindergarten classrooms and morning radio to political speeches and grocery store transactions, sound-bytes of English words and phrases can be heard in almost every corner of Metro Manila.  These recognizable pieces of English are the Filipino bilingual’s code-switching capacity at work. Taglish is visible in newspapers, audible in churches, and the norm on CNN Philippines.

Taglish is by no means standardized. It is a colloquial language used in mainly informal situations between family, friends and everyday conversation. Therefore, there is no official way to speak it. Since a lot of people, especially in the cities, can speak Tagalog and English to some degree, they should be able to understand any coherent combination of the two.

Language experts and teachers alike generally disapprove of the use of Taglish. This is likely due to the fact that is informal, making it attractive to certain types of marketing, but not useful for most other types of communication or outreach.

It should be now be easy to see how all this terminology can get confused. In consulting with one of our own linguistic experts about this article, Menard Seguenza added: “Today, Pilipino is how locals refer to themselves. So, we call ourselves “Pilipino”, and we call our language “Filipino.” We can add this to the definitions here, apart from it being used as the name of the national language during the 70s.”

We Speak Their Language

At International Contact, we generally recommended folks stick to modern Tagalog/Filipino language for their communications, but we have experts and linguists in all the languages and dialects of the Philippines, as well as over 100 other languages of the world. Why not call us today and see how we can help you speak the language of your customers wherever they are and whatever language they speak.

Happy Year of the Ox!

Should your Spanish communications use “tú” or “usted”?